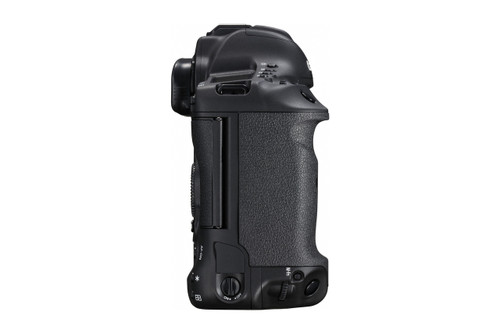 The Mark of Legends.

Immense power. Phenomenal speed. A remarkable combination of innovation and refinement. The new EOS-1D X Mark II camera is nothing but legendary every step of the way. Building on a heritage of sophisticated innovation, the EOS-1D X Mark II is blazingly fast. Up to 14 fps* (up to 16 fps* in Live View mode) can be captured at a burst rate of up to 170 RAWs with a CFast™ card, and an improved 61-point AF system helps deliver clean, sharp images quickly, even in dim light. This remarkable speed means faster recording too: 4K video can be recorded at up to 60 fps with smooth AF and strikingly clear detail. Combined with superb low-light performance thanks to its powerful sensor and expandable ISO range, the EOS-1D X Mark II performs brilliantly, swiftly and stunningly no matter when or where the photographer is shooting. From the stadium, safari or studio to virtually everywhere in between, the EOS-1D X Mark II maintains and enhances all the hallmarks of what Canon has to offer, marking a new page in the legacy of the EOS series of cameras.

Up to 14 fps* Full-resolution RAW or JPEG, Up to 16 fps* in Live View Mode
Delivering outstanding performance at speeds of up to 14 fps*, and up to 16 fps* in Live View, the EOS-1D X Mark II camera is loaded with technologies that help facilitate speedy operation at every step of image capture. The EOS-1D X Mark II features a new mirror mechanism designed for highly precise operation with reduced vibration even at incredibly fast speeds. The shutter unit is rated for 400,000 frames and captures at up to 16 fps*, while the CMOS sensor has high-speed signal reading that enables speedy image capture. A fast AF/AE system, Dual DIGIC 6+ Image Processors and high-speed recording with its new CFast™ card slot helps ensure that camera operations are performed quickly and precisely.

Dual DIGIC 6+ Image Processors
Key to the performance benchmarks achieved by the EOS-1D X Mark II camera, Dual DIGIC 6+ Image Processors not only convert the light that passes through the camera's sensor into high-quality photos and movies, but also enhance the camera's overall performance. Improvements include high-speed processing, up to 16-fps* operation for stills and 4K/60p movies, lens distortion and diffraction correction during operation with virtually no effect on the camera's speed, plus fast write times and much more. 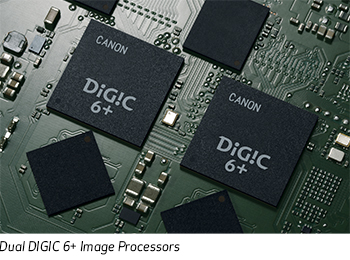 * Continuous shooting speed may vary based on the aperture and lens being used and conditions of the subject.

The EOS-1D X Mark II is an incredibly capable camera for moviemaking. Thanks to its Dual DIGIC 6+ Image Processors and its advanced sensor, it can capture huge 4K (Motion JPEG) video at up to 60 fps, recording smoothly to CFast™ cards. It's the first EOS camera able to record Full HD video at 120 fps, easily displaying minute details imperceptible to the human eye and ideal for slow-motion video capture. With the camera's new touch panel display, AF points can be easily selected while the camera's rolling, and focus can be quickly confirmed with the EOS-1D X Mark II's 4K still frame grab feature*, wherein an 8.8-Megapixel still image can be selected for review and saved. Low-light performance is improved as well, with video recording at ISOs of up to 12800 in 4K and 25600 in Full HD. The EOS-1D X Mark II also features uncompressed HDMI output for Full HD videos, helping to facilitate video editing with minimal image degradation. Not to mention, it can also save videos as MP4s for easy playback on mobile devices.

With significant improvements in AF operation, the EOS-1D X Mark II camera can be an indispensable and remarkably portable moviemaking tool. Continuous AF, even during 4K recording, is made easy thanks to the EOS-1D X Mark II's Dual Pixel CMOS AF, which is compatible with all Canon EF lenses. Focus points can be selected automatically, or specified on the camera's new touch panel LCD screen. Critical focus throughout the frame can be easily confirmed by enlarging stills grabbed from video recordings. The EOS-1D X Mark II's Movie Servo AF is compatible with all frame rates and resolutions, and can be customized to set tracking sensitivity, AF speed and even Face Tracking priority. These advanced features help make the EOS-1D X Mark II a truly versatile and convenient camera for 4K and Full HD moviemaking.

Providing crucial location and time data, GPS has become an indispensable aspect of the professional workflow, especially for professionals who work on location and capture thousands of images each day. The EOS-1D X Mark II camera has GPS* built in, helping photographers and filmmakers not only tag their images with critical location data, but also adjust the time and timestamp on the camera automatically. Thanks to built-in GPS*, and Wi-Fi® connectivity through the optional Wireless File Transmitter WFT-E8A accessory, the EOS-1D X Mark II can use both GPS and WFT (Wireless File Transfer) together, making it easy to upload a great amount of images both quickly and from increasingly far-flung locales. Offering compatibility with American GPS satellites, Russian GLONASS satellites and Japanese quasi-zenith satellites Michibiki, the EOS-1D X Mark II's GPS information is reliably accurate virtually anywhere you go. 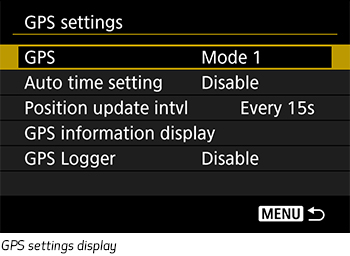 YES! We are a Canon Authroized dealer!