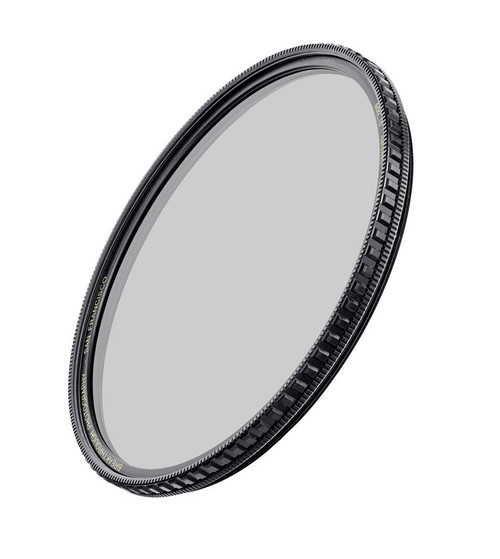 Introducing the world's most advanced circular polarizer.
The moment you use the X4 CPL, you know you've never used anything like it. Featuring all-new American made CPL film and an all-new brass traction frame features best-in-class design and durability. And that's just the beginning.

World's most color neutral CPL. Guaranteed.
Breakthrough Photography all-new and internally developed CPL film is at the core of the X4 CPL and they manufacture it right here in California. To achieve the worlds most color neutral performance, they had to develop a unique approach to manufacturing rather than selecting off-the-shelf CPL film common among filter manufacturers, which is designed and intended for LCD panels, not photographic optics.

All commercially available CPL filters exhibit a yellow cast due to a gradual transmission increase starting around 600nm and then spiking at 650nm onward into IR. With Breakthrough Photography X4 CPL film they achieved a gradual transmission decrease from 600nm onward and instead of spiking uncontrollably near 650nm and far into infrared, the X4 CPL sees very controlled transmission into IR, without the curve spike. The real world result? Warm and lively images without the apparent color cast.

Transmission Curve
Spectrometers are optical instruments that can detect spectral lines and measure their wavelength or intensity. Spectrometers can also be used to test the efficiency of an optical filter in order to evaluate color neutral performance. A perfectly flat transmission curve would yield a perfectly color neutral result and while there is no such thing as a perfectly neutral CPL filter (contrary to what other filter makers may claim) the X4 CPL is the most color neutral any CPL filter, guaranteed.

When filter makers use off-the-shelf polarizing films originally designed for LCD panels, it produces a predictable transmission increase at 650nm onward and a spike in transmission around around 680nm and into IR. During Breakthrough Photography research into alternative manufacturing methods, they were able to solve this problem. As a result the X4 CPL sees a decline in IR transmission across the visible spectrum and is very well controlled throughout the IR range.

Expand your dynamic range in-camera
Outdoor photographers frequently struggle with dynamic range, as the human eye has a dynamic range over 20-stops, while a mid-day outdoor scene (like the one below) may range between 15-18 stops. Professional camera systems range between 12-14 stops and during the last decade very little expansion progress has been made. You can sometimes recover detail in shadows if there's enough data there in post-processing, but you can't remove glare in post-processing and the removal of glare adds vibrancy, contrast and reveals details that are otherwise unseen.

When you rotate a circular polarizer you will see it turn ON and OFF through the viewfinder, allowing you to control the amount of polarization necessary for your shooting situation. The higher in elevation you shoot, the more pronounced the polarization and the more dynamic range is increased as a result.

A winning design proven by outdoor photographers
Breakthrough Photography took all they learned from the success of the X3 ND and designed an entirely new circular polarizing frame, unlike you've ever seen before. And like the X3 ND, they specifically designed the X4 CPL as a workhorse CPL for field work, built to withstand extreme wind, salt water, dust and other abrasive conditions and elements where other filters may fail. And Breakthrough Photography guarantee each and every X4 CPL to perform with optimal optical clarity and color neutrality for 25 years even in the harshest of conditions.

Nano Coatings
X4 CPL incorporates their state-of-the-art nanotec Nano Coatings Technology, which beads water and other elements rather than absorbing and smearing.

World's sharpest CPL filter, guaranteed.
The X4 CPL features SCHOTT Superwhite B270 optical glass, which is an ultra clear crown glass. It is produced by melting high purity raw materials and then made using the continuous draw process. The result is excellent transmission in the ultraviolet, visible and infrared spectrums and a high surface quality that accepts Breakthrough Photography state-of-the-art MRC and nanotec coatings exceptionally well.

Breakthrough Photography's state-of-the-art multi-resistant coating (MRC) is an optical coating applied to both surfaces of the glass disk to reduce reflection and to increase surface durability. Breakthrough Photography proprietary MRC coating is structurally harder than the glass itself and the reduced reflections improve the efficiency since less light is lost. The reduction of reflections also improves the contrast of the image by elimination of stray light. The real world result? Better contrast and color.

YES! We are a Breakthrough Photography Authroized dealer!