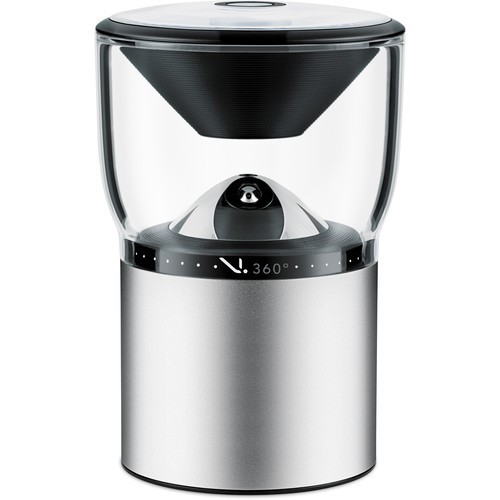 Take photos and videos which encompass a full 360° field-of-view using the VSN Mobil V.360° Sports Video Camera. Enclosed in the aluminum cylindrical body of the V.360° is a Qualcomm Snapdragon 800 processor which handles the capture and de-warping of your 6480 x 1080 images for seamless panoramic photos and videos. Sensors on the camera include a barometer, accelerometer, GPS, and altimeter. These sensors can add relevant information to your recordings.

You can mount the V.360° using the integrated standard 1/4"-20 thread. If you have three-prong GoPro-compatible action camera mounts, the V.360° is compatible with those as well using an included adapter. With that combination, you can mount the camera to virtually any surface. Since the camera is shockproof, dustproof, and waterproof up to three feet for 30 minutes, you can bring it along on aquatic, rocky, or sandy adventures. A silicone cover is included to add further durability as well as reduce high-speed wind noise.

Use the included Bluetooth remote to control the V.360°. It has one button to take a photo, and one button to record video. For more advanced options, the V.360° can also be controlled by your Apple or Android smartphone using the V.360° Companion mobile app. The camera can act as a Wi-Fi hotspot so you and your friends can view recorded footage or control the camera. The mobile app can also be used to make quick edits of recorded footage for immediate sharing.

YES! We are a VSN Authroized dealer!