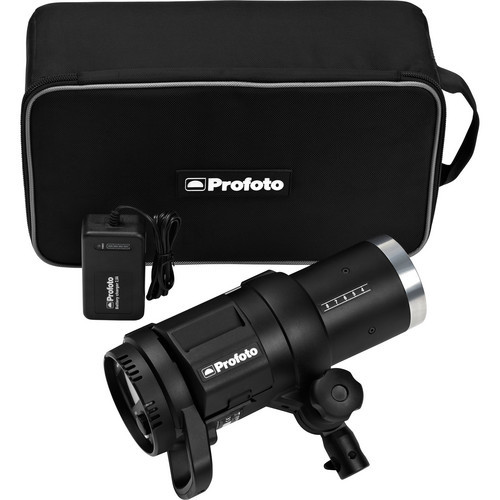 Whenever Profoto introduces a product, anyone in the photo world sits up and takes notice since at the very least, it's going to be impressive. The introduction of the B1 500 AirTTL is truly ground-breaking or to be more accurate, game-changing.

Based on the popular D1 Air series of monolights, all of the familiar professional and convenience features we've come to expect from Profoto are onboard. The B1 has the same dense, durable polymer housing, integrated 77-degree reflector, built-in receiver compatible with Air transmitters and intuitive highly visible controls and display as the D1 but with two striking differences - battery power and TTL camera/flash integration.

Busy photographers can literally set up their lights, slip the optional Air Remote TTL-C or TTL-N transmitter onto their camera's hot shoe and point-and-shoot without taking a reading and testing. Traditionally point-and-shoot would be a suspect term for a pro, but not if you're shooting back to back jobs on an impossible schedule with what you thought was an undoable deadline. Composition, posing etc, is of course up to the photographer, but time after time the B1 will give you a first shot exposure that's a keeper.

The key to this control is the optional Air Remote TTL-C (for Canon) or TTL-N (for Nikon) transmitter. Operating on 2.4 GHz band width, the transmitter, really a controller, has 8 frequency channels and with 3 groups per channel and a range of up to 330' for TTL triggering and 1,000' for normal triggering. Each channel has power ratio capability of +/- 2 stops. If you prefer to use manual you have +/- 9 stops power variation. You've also got modeling light, unit shut-down and first or rear curtain control. The TTL-C/N and the B1 500 Air TTL have mini-USB connectors for firmware updates directly from Profoto's website. The head can be triggered by any Air Remote but requires the TTL-C/N for full functionality.

Core performance features are equally impressive. The B1 recycles in 0.1 to 1.9 seconds but can deliver up to 20 flashes per second in Quick Burst Mode which engages at lower power settings. Flash duration in Normal Mode is a very fast 1/1000 sec but there's also a Freeze Mode that delivers flash durations a short as 1/19,000 sec. for capturing liquid sprays or splashes and other creative effects.

A free update from Profoto's website adds High-Speed Sync to the B1 and Air Remote TTL-C or TTL-N. HSS is the technical term for syncing flash with shutter speeds shorter than the so-called x-sync - typically 1/250 of a second. It's a useful tool for controlling ambient light and for freezing action. Profoto uses a patent-pending technology that emits an extremely fast series of flash pulses. With the upgrade installed, a simple button-press activates HSS Mode allowing you to shoot at shutter speeds as fast as 1/8,000 of a second. The B1 500 AirTTL employs an exchangeable Lithium-ion battery that gets up to 220 flashes on a 2-hour charge with the included 2.8A charger or a 1-hour charge with an optional 4.5A quick charger. The Battery has fuel gauge-type LEDs that make monitoring remaining power easy. The B1's modeling light has been upgraded to LED to put less strain on the battery and provide the equivalent output of a 70W halogen bulb.

Finally, B1's the back panel has been upgraded with a large, bright LCD screen that informs the user of the flash's power level, radio channel and group, sync choice, modeling light mode and recycle alert. There's also a large battery gauge that literally can be read from 20' away.

Full E-TTL II with Canon Cameras or i-TTL with Nikon Cameras
The B1's patent-pending technology fully integrates the flash head with your Nikon or Canon camera. The integration is so complete that Profoto sometimes refers to the B1 as an "off-camera flash." The key to this control is the Air Remote TTL-C or TTL-N

Optional Air Remote TTL-C / TTL-N
The Air Remote TTL-C and TTL-N transmitters have 8 frequency channels with 3 groups per channel and a range of up to 330' for TTL triggering. Each channel has power ratio capability of +/- 2 stops in TTL or +/- 9 stops in manual. Modeling light, shut-down of the unit and first or rear curtain exposure can also be selected.

Firmware Updates
Both the flash head and the Air Remote TTL-C or TTL-N have mini-USB connections for firmware updates such as High Speed Sync, directly from Profoto's website.

High Speed Sync as Fast as 1/8,000 Sec.
High-Speed Sync (HSS) is the technical term for syncing flash with shutter speeds shorter than the so-called x-sync - typically 1/250 of a second. It is a useful tool for controlling ambient light and for freezing action. Profoto uses a unique, patent-pending technology, providing an extremely fast series of flash pulses. With the free Profoto HSS upgrade installed, you switch to HSS Mode with a simple button-press that allows you to shoot at shutter speeds as fast as 1/8,000 of a second.

Exceptionally Short Flash Duration
In Normal Mode, which prioritizes color fidelity, the B1 500 AirTTL is capable of t0.5 flash durations of 1/11,000 sec. at minimum power, and 1/1,000 sec. at full power.

Quick Burst Mode
At lower power settings Quick Burst Mode allows a series of flashes to be fired at a faster pace than the B1 can recharge, allowing triggering of up to 20 frames per second.

Lithium-ion Battery Powered
The B1's Lithium-ion battery gives you up to 220 full power flashes and thousands of minimum power flashes on a 2-hour charge from the provided 2.8A multi-voltage charger. An optional 4.5A quick charger shortens that time to 1 hour. Fuel gauge type LEDs on both the battery and charger allow you to monitor remaining power.

LED Modeling Lamp
A 20W LED modeling light with a 70W tungsten-equivalent output draws very little power from the battery and generates minimal heat. The light can be set to proportional or full power and will dim during recycling if that option is selected.

Redesigned Control Panel
The B1's control panel has been upgraded with a 1.4 x 2.5" bright LCD screen that informs the user of the flash's Power level, sync choice, modeling light mode and recycle alert. There's also a large battery gauge that literally can be read from 20' away

Full Light Shaper System Compatibility
With its zoom scale and integrated umbrella sleeve, the B1 500 AirTTL is compatible with Profoto's extensive line of umbrellas, reflectors and softboxes.

YES! We are a Profoto Authorized dealer!