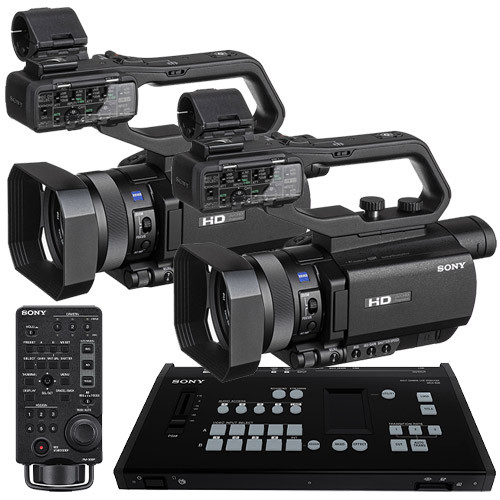 Included in this Live Stream Kit:

The HXR-MC88 Full HD Camcorder from Sony is designed for education, government, and individuals who require a lightweight HD camera solution. The HXR-MC88 features a 14.2MP 1" Exmor RS CMOS chip with a BIONZ X image processor that can work with as little as 1.7 lux illumination in low-lux mode for sharp images. The camera records up to Full HD 1080p60 at 28 Mb/s in the widely supported AVCHD format.

The Fast Hybrid autofocus system supports phase detection, face detection, and lock-on features to quickly capture sharp, in-focus images. Its fixed 29mm ZEISS Vario-Sonnar T wide-angle zoom lens features a 12x optical zoom and up to 48x digital zoom, and you can control iris, shutter, and ISO/gain via auto or manual operation. There is also a built-in neutral density filter wheel that cuts light by 2, 4, and 6 stops, allowing you to leave your individual ND filters at home.

The HXR-MC88 features one Sony Multi Interface (MI) Shoe which allows the attachment of proprietary accessories, such as lights and microphones. The camera includes an XLR handle that connects to the MI shoe and provides two 3-pin XLR audio inputs with 48V phantom power.

For live monitoring it has a 3.5" OLED touchscreen LCD monitor and an 0.39" viewfinder, both of which provide bright and accurate images. There is an HDMI type A as well as a multi-/micro-USB output. Video can be recorded to dual SDHC/SDXC card slots in relay or simultaneous modes; a Sony Memory Stick PRO-HG or PRO Duo (Mark 2) can be used in the first slot. A battery, AC adapter, lens hood, and lens cap are included.

Sony's MCX-500 4-Input Production Streaming/Recording Switcher is much more than just a portable four-input switcher. It is a global system that supports both 60 and 50 Hz production formats, so you can work with it virtually anywhere in the world. Four 3G-SDI inputs, two HDMI, and two composite (CVBS) inputs each feature a discrete frame synchronizer, allowing you to mix input sources. The unit internally processes the input footage at 1080i.

The MCX-500 combines a manual control surface with a touchscreen LCD that you can control locally or from a networked device. As you would expect from a professional mixer, cut, mix, wipe, and key effects are built into the unit. In addition to the program and multi-view preview outputs, the switcher can also live stream to services such as livestream via Ethernet, without requiring additional hardware. Likewise, the MCX-500 can record the program stream to an SD card, which is not included, via the built-in SD card slot. Beyond just the video switching capabilities, it is also a 5-channel audio mixer. You can control the switcher remotely via Mac, PC, or a tablet.

Sony's RM-30BP Remote Controller features a compact form and can control most of the functions of your compatible NX5R or FS7 (v4.0) camera. The remote enables control of the one-push auto, manual focus, iris, and zoom of your lens. It also allows you to control the recording/display functions of your camera, as well as shutter speed and white balance adjustment. You can assign six buttons on the controller and control the functions and playback of up to three cameras, individually or simultaneously.

The remote incorporates an adjustment knob that can be set to control your camera's focus, iris, or electronic ND selection (if your camera features electronic ND). At the bottom of the unit is a zoom rocker with protective bar to help prevent accidental activation. You can daisy-chain together two RM-30BP units, allowing either remote to control your camera. You can also connect the remote to a Sony MCX-500, allowing for that switcher to control up to three cameras.

YES! We are a Authroized dealer!