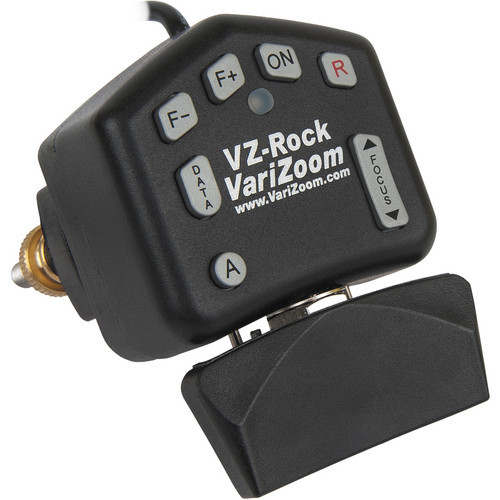 The VZ-Rock Variable Rocker from VariZoom is a LANC controller that features a pressure-sensitive, variable-speed zoom control with a record start/stop function, autofocus on/off, data on/off, and iris adjustment with F+ and F- (with compatible cameras). The entire unit can be attached easily to tripod handles up to 1.25" in width, making it suitable for a wide variety of video applications.
The bottom of the controller features a side-to-side, pressure-sensitive zoom rocker that allows you to perform gradual in-and-out zooms, smash zooms, or steady-speed zooms. An LED indicator on the face will indicate either active record, low battery, or end of tape or card. This compact controller will fit on nearly any tripod, camera support, or stabilizer arm with a maximum diameter of 1.25". The unit features a built-in LANC cable measuring 40" in length.

YES! We are a VariZoom Authorized dealer!