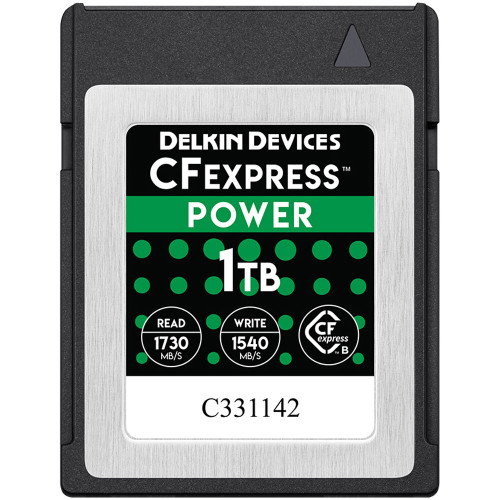 Built with strength, reliability, and performance, the 1TB CFexpress POWER Memory Card from Delkin Devices provides read speeds of up to 1730 MB/s and write speeds of up to 1540 MB/s, making it suitable for professional photographers and videographers. Designed to excel in high-end cinematic hosts, this card can capture 5.9K, DCI 4K, and Full HD video at standard and high frame rates of up to 180 fps, plus continuous shooting raw bursts of up to 200 still images.

Utilizing a PCI Express 3.0 x4 interface that supports NVM Express, this CFexpress card records at speeds up to 1540 MB/s for cinema-quality video captures, including DCI 4K and Full HD video at up to 180 fps. It also supports continuous burst shooting of up to 200 raw images.

Built to endure strenuous shooting environments, this CFexpress card is durably designed to be shock, water, magnet, and X-ray proof, anti-static, UV-guarded, and resistant to extreme temperatures. Each card is also backed by a Lifetime Warranty and Delkin's American-based customer support team.

Delkin CFexpress memory cards and those with the "48HR logo" come with a premium 48-hour replacement guarantee in addition to a limited lifetime warranty. Delkin replace any non-working card within 48 hours or less (not including weekends), prior to receiving your non-working card. You can also replace your card over the counter at any authorized Delkin reseller. To take advantage of Delkin's free CFexpress card replacement program and limited lifetime warranty, you must register your card online with Delkin.

Capable of offloading data at speeds reaching up to 1730 MB/s, CFexpress cards helps ensure quickest and efficient data transfers from card to computer for immediate access to your files and sooner post-production start times. This is good for photographers and videographers who need to quickly unload large amounts of data and get back to shooting.

Each CFexpress card has undergone extensive testing to help ensure full functionality and performance in today's high-end hosts. Built to meet the extensive demands of today's broadcast, cinema, and photography industries, the Delkin CFexpress memory card can be used for fast, reliable photo & video captures. It is important to note though that CFexpress cards are not backward compatible with either CompactFlash or CFast hosts.

YES! We are a Delkin Devices Authorized dealer!