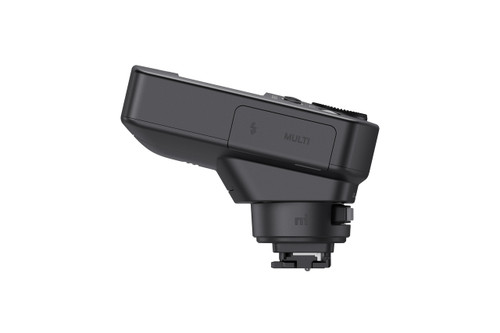 Create a radio-controlled wireless flash control system by pairing a Radio Control Wireless Commander (FA-WRC1M) attached to a camera with a Radio Control Wireless Receiver (FA-WRR1) attached to a flash. This allows you to wirelessly control up to 15 flash units in up to 5 groups as far as 98’ away. Compatible with flash sync speeds up to 1/250 sec. for and up to 1/8000 sec. in High-Speed Sync (HSS) shooting mode.

Capture multiple angles by controlling remote shutter release on multiple cameras. With the Radio Control Wireless Commander (FA-WRC1M) mounted to the control camera and synchronized with up to 15 cameras connected to Radio Control Wireless Receivers (FA-WRR1) and dedicated Multi Terminal Connecting Cable (VMC-MM1) you can get multiple angles without the need for multiple camera operators.

THe Wireless Radio Control shines even in scenes where infrared communication is difficult. The wireless 2.4 GHz RF transmission radio control system gives you the ability to shoot scenes with distant locations where you need to control the light on your subject from as far as 98’ or in strong sunlight where the sun washes out or objects block infrared ability and when objects block an infra-red signal from an IR flash system.

THe dust and moisture resistant design ensures that your flash system is a s rugged as the conditions you’re shooting in.