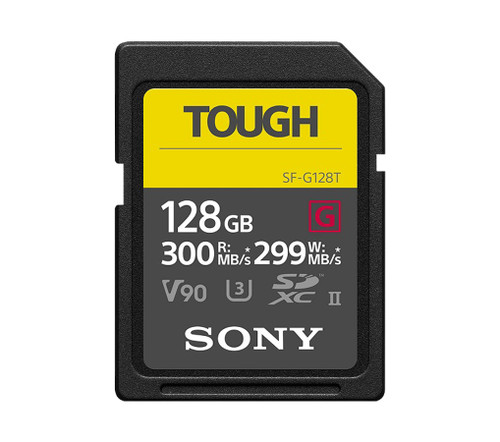 Availability:
More on the way

Sony’s new “SF-G series TOUGH specification” UHS-II SD cards are designed to keep images safe in any shooting environment, combining the world’s fastest read and write speeds with an ultra-rugged design that is bend-proof, drop-proof to 5 meters, water-proof and dust-proof.

The new cards are 18 times stronger than SD standard (180N compared to 10N rating) to guard against bending and dropping, and use the world’s first monolithic structure with a completely sealed one-piece molding that leaves no empty space in the card and prevents dust or debris from entering. The TOUGH spec. series uses materials of high-grade hardness, unlike conventional SD which uses a thin, 3-part ensemble. They are protected against typical physical damage that can affect conventional SD cards such as a broken plastic casing, broken data protection lock and broken connector ribs.

For photographers fighting the elements to get the perfect shot, the TOUGH spec. SD cards are also waterproof with an IPX8 rating and dustproof with an IP6X rating.

As the world’s first ribless SD card with no write protection switch, the new cards’ design ensures that easy-to-break parts are removed entirely.

Unleash the power of the camera

Continuing an industry trend driven by Sony, full-frame mirrorless cameras such as the α9 and α7 series are packing more and more performance into stills and video performance. These high-end cameras rely on fast memory cards to maximize their performance and with professional photographers now using SD cards more frequently, users are demanding higher levels of reliability and durability associated with other professional card types. With the world’s fastest write speed of up to 299MB/s, buffer clearing time is minimized, allowing photographers to shoot at the highest burst speeds.

Transferring high-capacity photo and video files is made simple with the TOUGH spec. cards, thanks to a read speed of up to 300MB/s, another world’s fastest, which dramatically streamlines the post-shooting workflow. Addressing the practical needs of photographers, the SF-G series TOUGH specification range feature a bright yellow banding design, making the card easier to spot in dark shooting conditions.

The TOUGH spec. series SD cards include a SD Scan Utility, allowing the user to check that the card is in good condition and File Rescue Software to recover accidentally deleted data and photos. The new cards are also X-ray proof, magnet proof, anti-static, temperature proof and feature UV Guard.

A monolithic construction with high hardness materials have resulted in the world's highest level of bend strength,18 times greater than the SD standard (180 N).
This design eliminates the risk of physical damage and protect the data recorded onto the card, ideal for busy professional photographers even under severe shooting locations.

*Based on new specifications added by the SD Association.

Completely sealed with monolithic structure, this card is waterproof (compliant to IPX8) and recorded data is undamaged even if the card is submerged in 5 meters of water for up to 72 hours.

Also completely sealed with monolithic structure, the card is dustproof (compliant to IP6X) and keeps out all dust particles, and can be used in severe shooting environment.
Even if the card is used in dusty or dirty areas or dropped in mud, it can be washed in fresh water and wiped off to be used again for perfect flexibility.

*IPX8 : This class of 'waterproof performance' is defined in IEC standards, etc. (9 levels, from 0-8) as the highest level, indicating 'the ability to keep water out of the interior even after continued submergence'. (**According to Sony testing using tap water.)

*IP6X: This class of 'dustproof performance' is defined in IEC standards, etc. (7 levels, from 0-6) as the highest level, indicating 'the ability to keep dust out of the interior'.

The monolithic construction with rock-solid mateials provides shock resistance, withstanding drops test from a height of 5 meters.
This design reduces the risk of damage from dropping when swapping the card out frequently at busy shooting locations.

Get the most out of burst shooting

Sony developed high-speed capture technology to achieve the world's fastest write speed of up to 299MB/s*2. Along with the supporting UHS-II interface, this revolutionary write speed maximizes the burst-shooting capabilities of high-end DSLRs.

The SF-G series supports the continuous shooting of 241 compressed RAW or 362 JPEG images when shooting by α9*2, which has burst-shooting capability up to 20 frames per second.

Never miss the critical moment
Greatly reduce buffer clearing time with its ultra-fast write speed, you can quickly start another burst shooting. You can shoot the decisive moment even at unexpected photo opportunities.

< What is the "Video Speed Class"? >
This is a standard defined by the SD Association for video recording. It guarantees a minimum write speed necessary for video recording. Currently there are five grade (V90, V60, V30, V10, and V6). V90 (Video Speed Class 90), guarantees a minimum write speed of 90 MB/s, and supports stable recording high resolution video such as 4K and 8K.

For fast backups to PC

Supports UHS-II memory cards and maximizes the high-speed transfer capabilities of the SF-G series memory cards. The MRW-S1 also enables faster backup of large files to a PC via a USB 3.1 Gen 1 interface versus copying through an SD slot.

Flash memory used in memory cards has a limited number of write cycles because it gradually wears out as data is overwritten repeatedly over time. Once a memory card has reached the limit of write cycles, it is no longer able to accept data for recording, even while shooting.

Compatible with Windows and Mac OS.