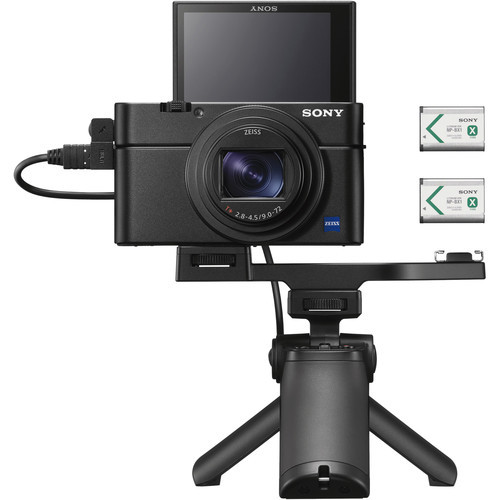 The RX100 VII is powered by a newly developed 1.0-type stacked 20.1 MP Exmor RS CMOS image sensor and the latest generation BIONZ X image processor, which work together to deliver peak autofocus and speed performance that has never before been available in a compact camera. Flexibility of shooting is ensured by a ZEISS® Vario-Sonnar T* 24-200mmviii F2.8-4.5 high magnification zoom lens, making the RX100 VII a versatile choice for all types of shooting scenarios and users, ranging from photo enthusiasts to professionals.

The RX100 VII offers a world-leading 357 focal-plane phase-detection AF points and 425 contrast-detection AF points. In addition, thanks to a newly optimized lens drive control, the world’s fastest 0.02 sec AF acquisition time is realized. A major leap in AF/AE tracking performance during continuous shooting means the camera performs AF/AE calculations up to 60 times per second and captures fast moving action at 20fps with AF/AE tracking, ensuring that each moment is shot with swift and accurate focus.

In addition, the image sensor realizes blackout-free shooting for a completely live view, even when continuous shooting at 20fps; the same experience as the Alpha 9. The RX100 VII also debuts a new drive mode, Single Burst Shooting, for capturing the perfect high-speed shot at up to 90fps in JPEG/RAW format utilizing the anti-distortion shutter. Single Burst Shooting allows the photographer to frame fast moving action and shoot as if taking a single shot, but the camera will actually deliver seven still images taken at 90fps, 60fps or 30fps, so the user can select the perfect moment.

For the first time in a compact camera, the RX100 VII introduces advanced Real-time Tracking and Real-time Eye AF capabilities. Real-time Tracking utilizes Sony’s latest algorithm, including artificial intelligence-based object recognition to ensure that subjects can be captured with excellent accuracy, even via the touch panel on the rear screen. Real-time Eye AF, the latest version of Sony’s acclaimed Eye AF technology, employs A.I.-based object recognition to detect and process eye data in real time. This results in improved accuracy, speed and tracking performance of Eye AF for both humans and animals, which allows the photographer to concentrate exclusively on composition .

The compact and lightweight characteristics of the RX100 VII (approx. 302g / 102mm x 58mm x 43mm ) mean it can always be carried and has mounting flexibility that larger cameras simply cannot match.

The ZEISS® Vario-Sonnar T* 24-200mm1 F2.8-4.5 zoom lens covers a broad zoom range equivalent to two standard zoom lenses (24-70mm and 70-200mm), all in a very compact size. It's configured with eight aspherical lens elements to achieve maximum resolution, clarity and contrast across the entire zoom range, and all the way out to the edge of the image. Four of Sony's original AA (advanced aspherical) elements help minimize spherical, coma and chromatic aberrations.

Up to 20 fps Blackout-free Shooting, up to 60 times/sec. AF/AE calculations

The new image sensor offers continuous shooting at up to 20fps, and the camera tracks subjects with AF/AE calculations at up to 60 times per second, even when they are moving erratically or at high speed. Blackout-free Shooting6 lets you track your subject's movement without interruption on the camera's LCD display or viewfinder screen just as if you were following with the naked eye.

The new Single Burst Shooting function will capture the tiniest slices of daily life, such as the very instant a tennis ball hits the racket, and turn them into works of art. Take seven shots in rapid succession at selectable speeds of 90fps, 60fps or 30fps, all triggered by a single press of the shutter button. Even fast-moving subjects can be captured thanks to the Anti-distortion Shutter, in RAW as well as JPEG image formats.

AI-based Real-time Tracking for stills and movies, and Touch Tracking

Real-time Tracking uses subject-recognition algorithms (AI) that draw on color, pattern (brightness), subject distance (depth) and face/eye information to track subjects wherever they move. Maintaining a constant, steady focus on a moving subject helps capture every important moment of action as it happens, whether taking stills or movies. Tracking can also be initiated through Touch Tracking, for both stills and movies.

Real-time Eye AF for humans (stills and movies), and for animals (stills only)

Real-time Eye AF detects subject's eyes and maintains focus as the subject moves, leaving you free to compose your shot. The subject's eyes are detected with half-press of the shutter, and it's possible to select either the left or right eye of the subject. It can be used in conjunction with Real-time Tracking, in which case the focus frame can seamlessly switch between the subject's face and eyes as the subject moves. Real-time Eye AF for Animals9 is also supported, helping to produce better pet portraits and wildlife shots.

Though very compact, RX100 VII includes a standard 3.5mm microphone input jack enabling the use of high-end microphones for professional audio capture for movies and vlogs. The camera supports movie recording in vertical format with embedded metadata indicating the camera's orientation16. This means that movie clips in this format that are transferred to smartphones can be played back and used as is, without needing to rotate them from horizontal format.

The RX100 VII maintains the convenient pocket-sized design of the RX100 family and is equipped with a high-contrast 2.35 million dot XGA OLED Tru-Finder™ electronic viewfinder, ensuring true-to-life image preview and playback functionality. With a single push, the EVF conveniently pops-up and automatically extends the eye-piece. It features optics with ZEISS® T* coating that greatly reduces reflections.

See the unseen with super speed HFR (High Frame Rate). The RX100 VII can capture super slow motion HFR movie at up to 40x slower than real time. You can choose from 960fps, 480fps or 240fps to playback in XAVC S at 1920 x 1080, in either 60p, 30p or 24p. Choose between “quality priority” (4 sec.). There’s also an option to set “start trigger” or “end trigger” which will start capturing movie before or after you press the movie rec. button so you can time those split-second moments perfectly.

Clean, uncompressed 8-bit 4:2:2 4K or HD movie signal can be transferred to an external monitor/recorder connected to the RX100 VI via the HDMI® terminal. Video can be recorded simultaneously to internal media and uncompressed video to the external recorder in real time.

Selfies have never been easier with a beautiful 3” (921k dots) LCD Display that rotates in multiple angles. This also makes it easy to photograph over crowds or low to capture pets eye to eye by swinging up approx. 180° and down approx. 90°. The large display delivers brilliant-quality still images and movies while enabling easy focusing operation. Monitor Auto OFF function boosts max number of still images by up to 30%.

Easily connect with NFC or QR code (for non-NFC devices) to smartphones or tablets with the built-in Wi-Fi® and Sony’s Imaging Edge Mobile™ application available for Android™ and iOS platforms. Control your camera or transfer files to your device for fast and easy sharing without the need of a computer. When you’re done, you can use the free software to sort and manage your stills and video with or view and edit your RAW file with either Sony’s Imaging Edge software or Capture One Express (for Sony).

A unique control ring around the lens works in combination with an intuitive, display interface for direct control over settings. The control ring can be assigned to adjust various features (at various values) from basics like zooming and aperture to creative functions like Picture Effect. Moreover, it turns smoothly and seamlessly, allowing quiet, click-free usage while shooting movies including a new step-zoom function that enables instant selection of commonly used focal lengths.

The RX100 VII can be powered via USB connection to AC adaptor, a PC or mobile battery. This conserves the camera’s battery, allowing you extended use of the camera without worrying that the battery will run out. When the camera is turned off, the battery can be charged via the same connection.