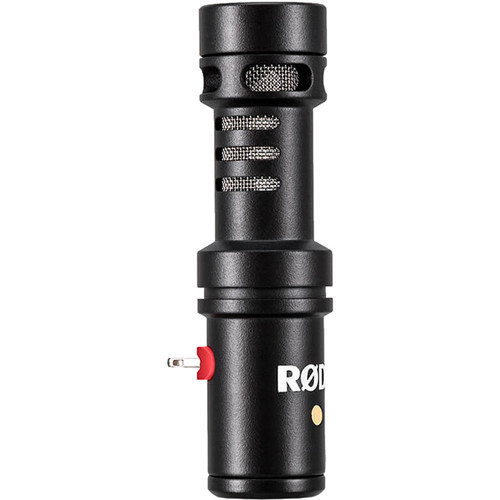 The Rode VideoMic Me-L is a directional microphone designed to operate with iOS devices, including iPhones and iPads. It provides a marked sonic improvement to video recordings, especially when compared to your iOS device's built-in microphone.

A frequency response of 20 Hz to 20 kHz gives you a wide audible range, while an SPL of 115 dB allows you to record louder sounds without distortion. Being cardioid in polar pattern, the microphone exhibits a directionality that focuses the sound wherever you're pointing the device, providing a measure of rejection to any audio hitting the sides of the mic.

Relatively lightweight at 1.0 oz, the mic plugs directly into your iOS device by means of its lightning connector, though a 3.5mm jack is on hand for direct monitoring through headphones. Thus, you can always ensure you're getting good sound, either while recording or during playback. A mic clip is included to secure the mic to your iOS device, and an included furry windshield makes capturing audio in breezy outdoor locales less of a deal breaker.

YES! We are a Rode Authorized dealer!