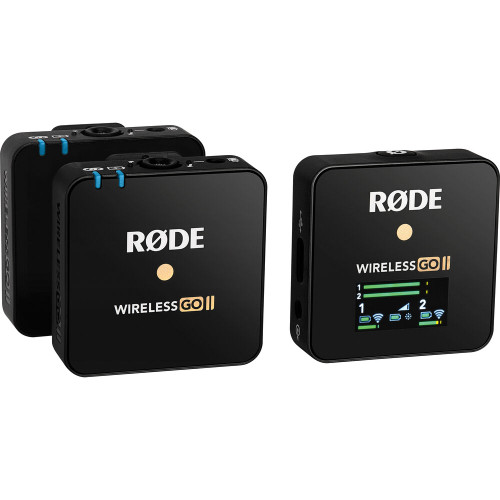 Expanding on the original Wireless GO with updates allowing for two-person shoots, onboard recording, a greatly extended range, and flexible output options, the black Rode Wireless Go II system lets videographers, vloggers, and mobile journalists confidently and quickly incorporate wireless audio into their setup regardless of their experience level or what device they're recording to.
Boasting secure Series IV 2.4 GHz digital transmission, easy operability, and built-in mics (lavalier mics available separately), the system is ready to go at the press of a button; you can focus on getting the shot knowing that the Wireless GO II is delivering quality audio at a range of up to 656 feet. There are no menus and no finicky dials, just simple power-on-and-go functionality and a bright, informative LCD screen showing you what you need to see. When you're ready for more, use Rode's companion app to access a powerful feature set and extended customization of settings.

Out of the Box, onto the Set

Grab a Mic and Go

YES! We are a Rode Authorized dealer!